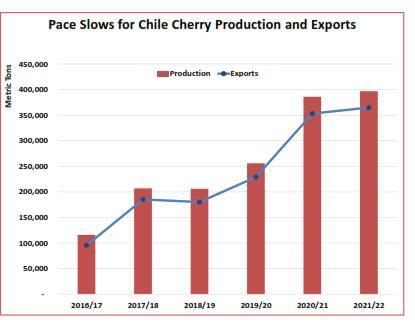 China accounted for 57% of global imports in 2020/21, and most of the increased trade is driven by its purchases from Chile, according to USDA data. The South American country overtook the US as the world’s leading cherry exporter in 2014/15, and has dominated trade ever since. But Turkey too has nearly doubled its exports over the past decade and is close to taking second position from the US. Chile’s exports in the current campaign are expected to grow by only 3% (365,000 tons), which represents a slowdown compared to recent years. This loss of dynamism is attributed to lower production, as growers more aggressively prune trees and thin flowers and fruit in an effort to improve quality and calibre. They also have to contend with drought conditions in most cherry-growing regions.

Global fresh cherry production has grown by almost a third over the past 10 years to reach just over 4 million tons in 2020/21. However, the growth has not been uniform across the world. While China, Chile and Turkey have seen average increases of over 30,000 tons per year, output has shrunk in the EU (-16%) and the US. In 2011/12, the EU was the world’s top producer but has since been overtaken by Turkey, and China is fast catching up, too, as it continues to expand and improve its own industry. Meanwhile, acreage remains flat in the US, the world’s fifth-largest producer.