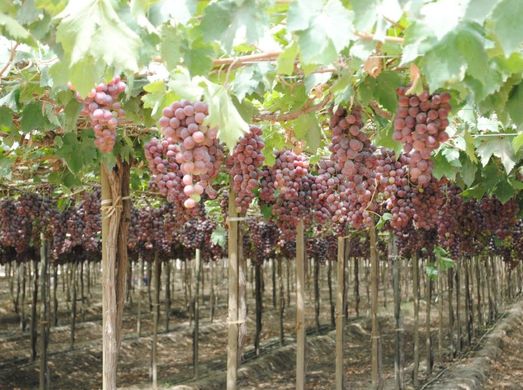 Chinese table grape production is expected to fall by 10% to 945,000 tons in 2018-19 due to spring frost damage, according to USDA data. The two worst affected production areas were Hebei and Shaanxi, with volumes down by 30-50%, according to local estimates. Other major producing provinces like Xinjiang, Hebei, Shandong, Yunnan and Zhejiang were not heavily affected. Meanwhile, China’s grape imports are estimated to be down 7%, to 200,000 tons, as a result of the trade war with the US, which has no significant competitors in the Northern Hemisphere during its shipping season. Although Southern Hemisphere suppliers will probably increase their table grape exports to China, this will not make up for the shortfall. The grape planted area (826,000 ha.) continues to increase in response to favourable market conditions. The Chinese harvest season runs from April to November. Popular new varieties include Ruiducuixia, Jumbo Muscat, Flame Seedless, Gold Finger, Shine Muscat, and Crimson Seedless.

Meanwhile, China’s apple crop is also expected to be severely damaged by the spring frosts. According to production estimates for the 2018-19 season, total volumes will reach 31 million tons, representing a fall of 25% from last season. The main production regions are all severely affected, with Shaanxi Province volumes down 20-30%, and those of the Shanxi and Gansu provinces down by as much as 30-50%.