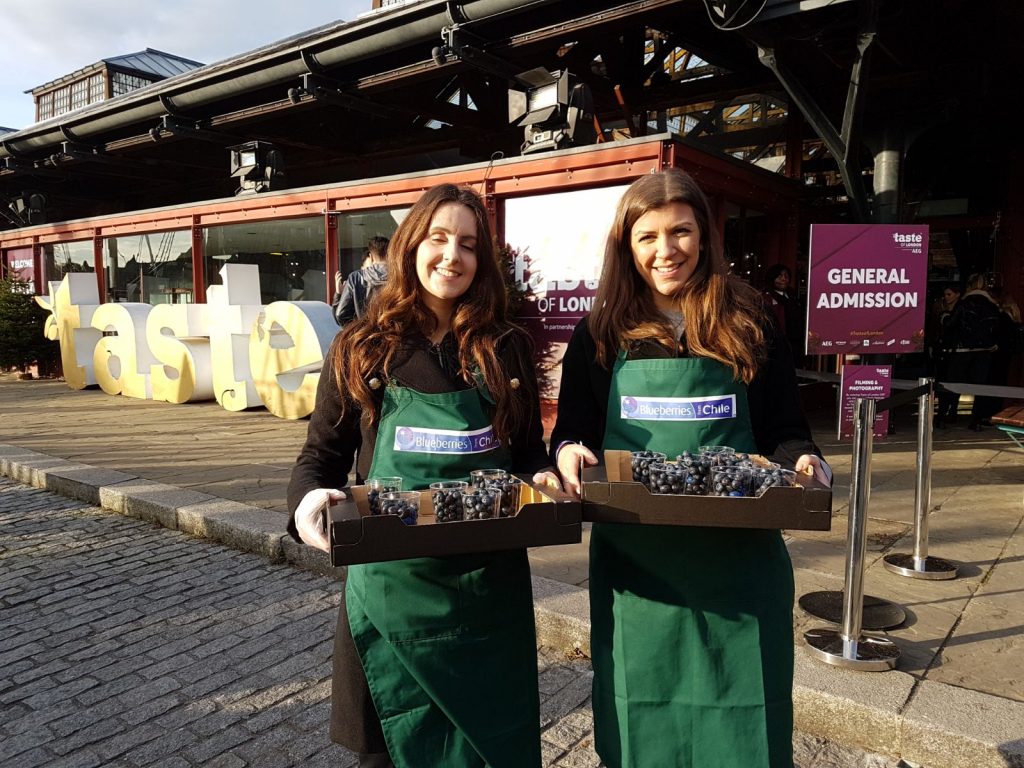 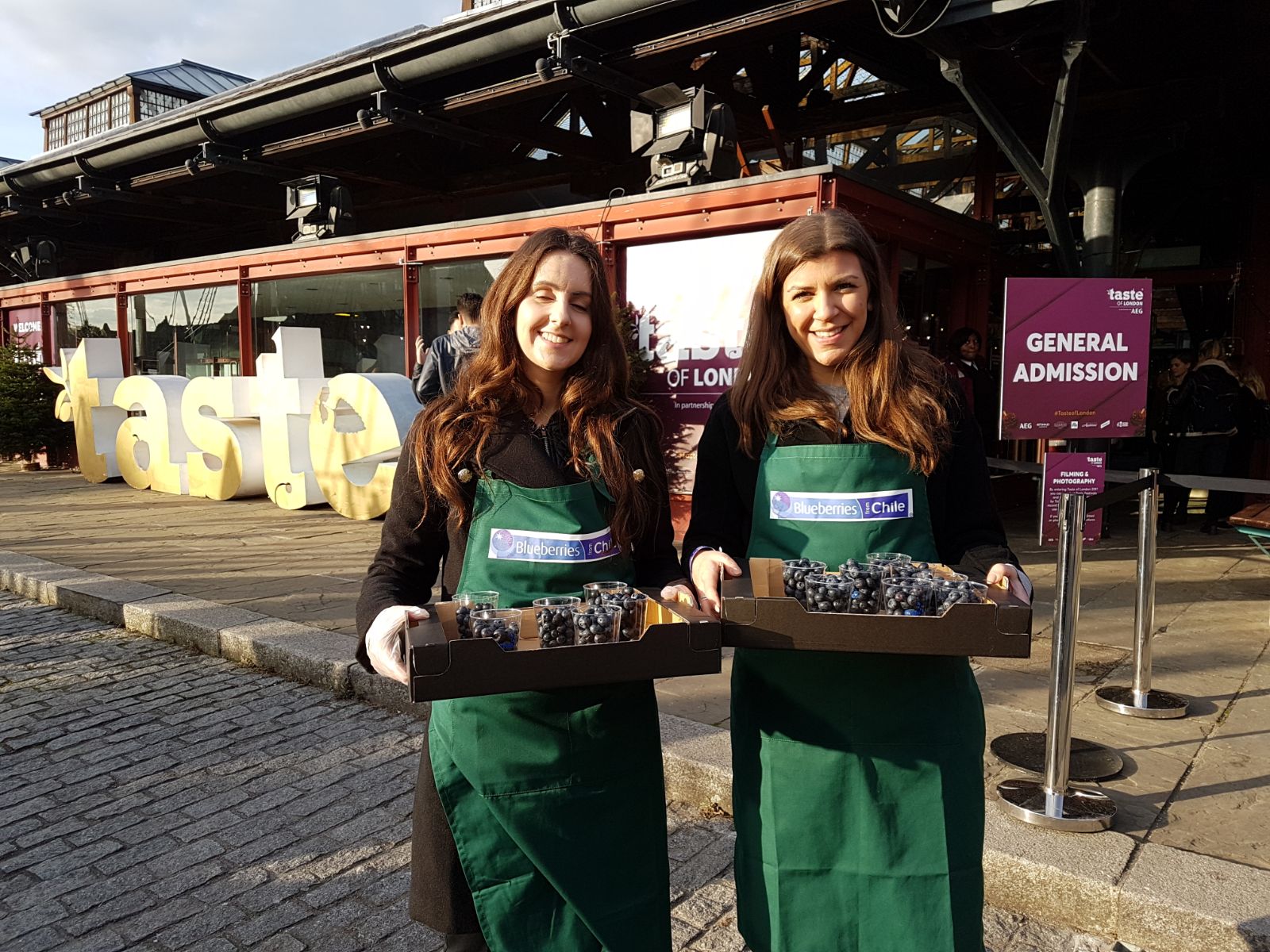 The Chilean Blueberry Committee’s brand-new UK campaign will promote blueberries as the perfect sharing food and health snack, as exports prepare to break a new record.

Chile’s 2017-18 blueberry campaign has got underway in style in the UK with its first-ever sampling at Taste of London as part of a season-long calendar of health-focused promotions designed to accommodate record exports. Supported by the Chilean Fresh Fruit Exporters Association (ASOEX), The Chilean Blueberry Committee handed out 2,000 pots of blueberries at the main entrance to London’s major restaurant festival for foodies, which took place last week on 16-19 November.

“Participating at Taste of London served as a timely reminder for consumers that Chile is the world’s largest blueberry exporter, our new season is approaching and we are preparing to export to the UK,” commented Charif Christian Carvajal, ASOEX’s Marketing Director for Europe, Asia and the Middle East.

The pilot promotion, which lasted from 11am to 4pm on both Friday and Saturday, communicated a distinct message to a specific audience about the counter-seasonal availability of Chilean blueberries to local production in the UK.

“Foodies are an important target market in terms of increasing and maintaining the penetration level in the UK for fresh blueberries from Chile,” Carvajal said.

“We want to introduce Chilean blueberries into different meal occasions and foodies are the key opinion leaders that will carry this message through.”

This season The Chilean Blueberry Committee will coordinate a number of inspirational promotions in the UK; firstly to position blueberries as the go-to winter berry during November and December and, secondly, as the perfect healthy snack for January and February.

“We want to promote blueberries as a sharing food that’s ideal for families and friends coming together during the festive season, as well as the ultimate snack to help promote a healthy mind in the traditional post-Christmas healthy-eating period,” noted Carvajal.

“Within this context, we will be educating consumers about the emotional benefit of eating together, alongside the health benefits of blueberries in terms of boosting cognitive function and mood.”

As well as reaching out to health-conscious consumers, the campaign will target primarily the older generation who are keen to keep their minds healthy and active, while also being more accustomed to eating socially.

The campaign will consist of a two-pronged approach; using traditional PR tactics, alongside social media outreach and direct engagement to help drive word of mouth around the perfect winter berry.

Key activities will include: developing blueberry festive recipes and healthy eating sharing dishes featuring blueberries; providing sampling opportunities for older consumers in conjunction with a charity for the elderly; and distributing information on the role of blueberries in healthy living, backed by a nutritionist.

The Chilean Blueberry Committee expects to export over 100,000 tonnes of fresh blueberries to its global markets this season, which would mark a new record for the thriving industry.

“In addition to the natural production growth coming from maturing plantations, the varieties under production are being renewed continually, which is resulting in bigger yields and better quality,” explained Andrés Armstrong, Executive Director of The Chilean Blueberry Committee.

“The Committee is dedicated to trialling new blueberry varieties that can travel long distances, that are larger in size and that offer a sweeter flavour.”

The UK market remains strong for Chilean blueberries. The fruit now represents a firm fixture within the winter fruit and overall berry category. Last season (2016-17), Chile exported almost 11,000 tonnes of blueberries to the UK, according to ASOEX data. The result was an 11% increase in comparison to the previous season.

A similar growth pattern is anticipated for 2017-18. “This season we definitely expect to see further interesting growth in exports to the UK of about 10-11%,” anticipated Armstrong.

“Also, in the next few seasons a lot more organic blueberries from Chile will go to the UK because the UK is one of the top organic markets into Europe, along with Germany and France.”

Today about 25% of the blueberries planted in Chile are in the process of being certified as organic.

“It’s a growing trend in recognition of the expansion of the global organic blueberry market,” notes Armstrong.

Although there have been no major climatological issues in the run-up to this season, The Chilean Blueberry Committee anticipates its blueberry harvest will start slightly later in 2017-18, by around two weeks.