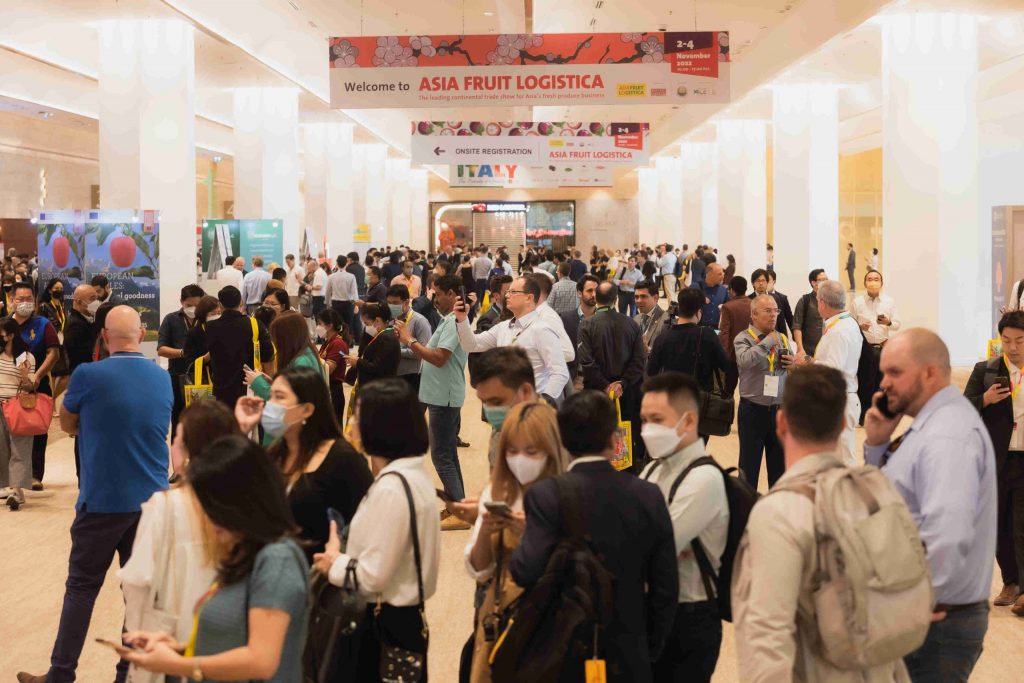 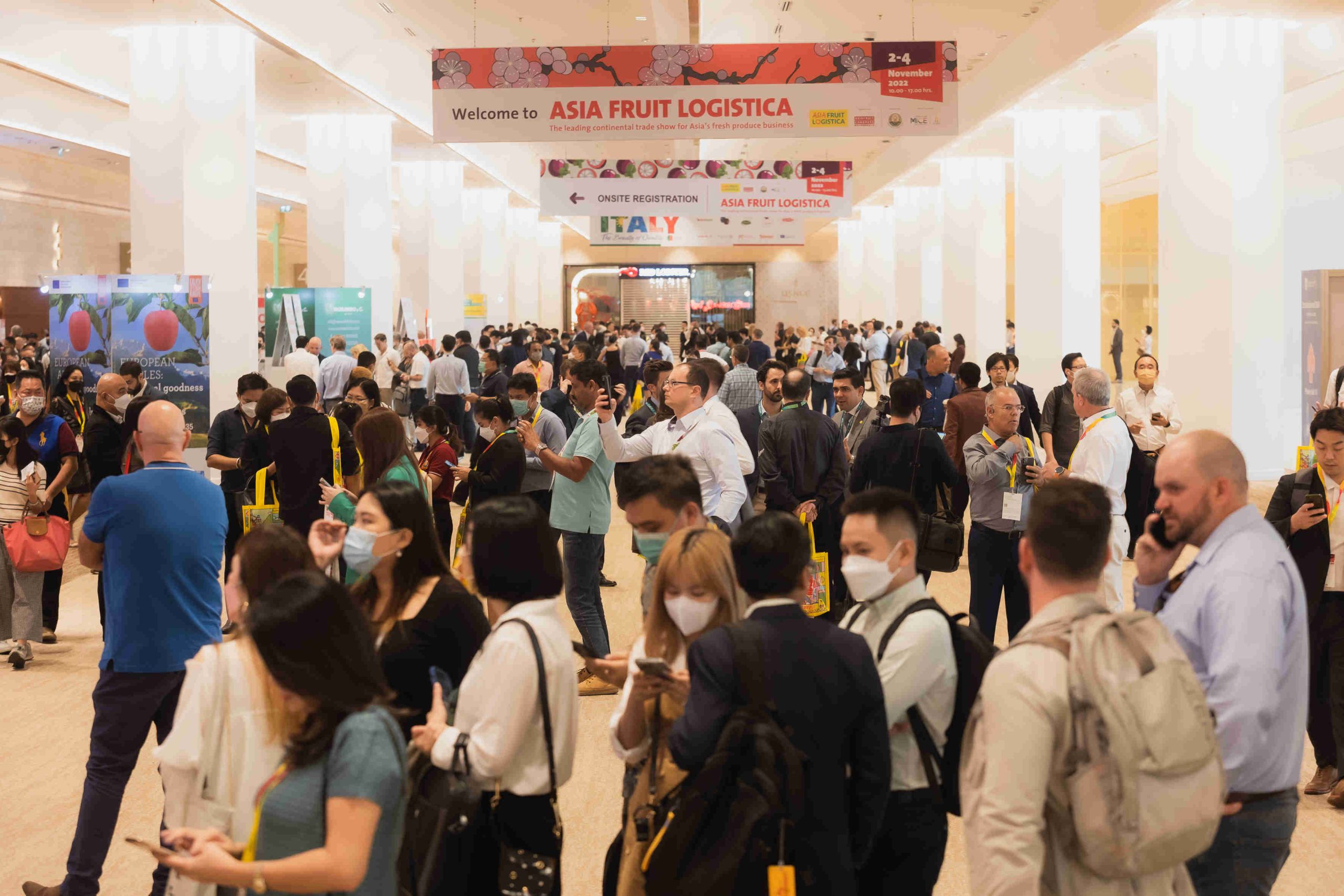 The annual pan-Asian awards are presented by ASIA FRUIT LOGISTICA and ASIAFRUIT MAGAZINE to celebrate excellence and recognise outstanding achie­vement in Asia’s fresh fruit and vegetable business, with the winners selected by the two organisations.

The winners were announced during a presentation ceremony today at ASIA FRUIT LOGISTICA, Asia’s premier fresh produce trade show, which is taking place at Queen Sirikit National Convention Center in Bangkok on 2-4 November.

The ASIA FRUIT AWARDS are given in four categories – ‘Marketing Campaign of the Year’, ‘Importer of the Year’, ‘Produce Retailer of the Year’, and the ‘Impact Award’, which recognises a person and/or organisation that has made a significant contribution to developing Asia’s fresh produce business.

MARKETING CAMPAIGN OF THE YEAR: CLEMENGOLD

ClemenGold won the Marketing Campaign of the Year Award for its success in building a market for ClemenGold-branded mandarins in China.

ClemenGold debuted in China in 2013 with limited volumes to test the market and its appetite for the brand. Sales increased sixfold between 2019 and 2021, reaching a range of wholesale and retail customers. China now forms a key part of ClemenGold’s sales strategy, and the market interaction with the brand has exceeded the company’s expectations, Hey noted.

ClemenGold is a registered brand for premium quality mandarins, including the Nadorcott variety. The soft citrus variety historically found less favour in China compared with other markets, with an impression among the import trade that traditional, firm mandarin varieties were superior. ClemenGold has developed a strong following in China with its focus on consistent quality and reliability of supply, Hey pointed out. The brand and fruit supply are backed by a robust supply chain owned by ClemenGold’s holding company, ANB Investments, which encompasses companies responsible for variety development and commercialisation, nurseries, orchards and state-of-the-art packhouses.

ClemenGold was also recognised for the success of its marketing model in China. The marketer has selected a group of wholesale and retail partners who have embraced ClemenGold’s branded approach and used their sales and marketing expertise to conduct a series of innovative activities. These range from high-profile branding on the exterior of buses on one of Shanghai’s busiest bus routes to ClemenGold-themed pop-up retail shops and consumer events.

The growing popularity of ClemenGold mandarins in China has also helped pave the way for the launch of LemonGold seedless lemons and the development of sister brands, Sweet C and ClemenOrange.

ClemenGold’s marketing manager Adéle Ackermann said it was an “incredible honour” to receive the Marketing Campaign of the Year Award.

“A special word of thanks to all our importers in China for being part of the ClemenGold family,” said Ackermann. “This award recognises the effort and strategic thinking that’s gone into our campaign messaging and our desire to truly connect with Chinese consumers.” 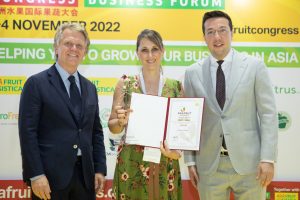 IMPORTER OF THE YEAR: GOODFARMER

Celebrating its 20th anniversary in 2022, the group was recognised for its success in building long-term relationships with global partners to become one of China’s leading fruit importers.

Goodfarmer was also singled out for its success in navigating the pandemic and the associated global supply chain disruption. The company has leveraged on its long-term relationships with shipping partners to maintain the continuity of import programmes, Hey noted. Goodfarmer also adapted quickly to pandemic disruptions and to its clients’ needs, ramping up its home-delivery business and keeping consumers supplied with high-quality fruit.

Goodfarmer’s continued growth also reflects the substantial investment the company has made in developing its nationwide teams and distribution infrastructure over the past ten years, said Hey. This network spanning 30 major cities has enabled the group to service its customers efficiently and add value for premium brands.

While continuing to develop core import categories such as bananas and pineapples, Goodfarmer has diversified its product range. It has ramped up its focus on fast-growing products, such as tropical fruits from Thailand and Vietnam. In addition to being a licensed distributor for Zespri kiwifruit in China, Goodfarmer has signed strategic partnerships with leading brands such as Mr Apple, Rockit, T&G Global and Driscoll’s. At the beginning of this year, it also entered a partnership with Focus Media, one of China’s largest out-of-home advertising networks, to build the Goodfarmer brand as a consumer-facing brand.

Owen Zhang, Goodfarmer’s China general manager, said the group was honoured to win the ASIA FRUIT AWARD for Importer of the Year.

“We have achieved good results in the global fruit business through our professional management systems and our industry knowledge,” said Zhang. “In the future, Goodfarmer will continue to deepen our strategic cooperation with global partners to build a world-class fruit brand.” 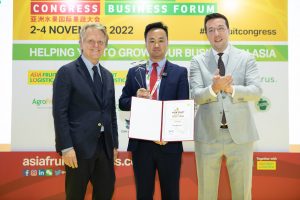 Makro (Thailand) took out the Produce Retailer of the Year Award.

Thailand’s leading wholesale chain was recognised for its commitment to suppliers and for the efficiency of its operations.

Introducing the winner, Hey said Makro stood out for the success of its centralised ordering system, with smooth management of product from DC through to store. “Makro runs ordering and programmes with suppliers very effectively,” he noted. “With good information flow and efficient systems, it ensures its stores are well stocked, delivering quality fresh produce to B2C and B2B customers.”

Makro was also singled out for its success in building direct sourcing relationships with suppliers. “Makro displays a professional and pragmatic approach in dealing with suppliers,” said Hey. “This has helped it to develop strong supply partnerships.”

With a mix of B2C and B2B customers and close to 150 stores across Thailand, Makro is effective in retailing high volumes of fresh produce, Hey pointed out. In addition to promoting sales of imported fruits, it has undertaken extensive promotions to support local fruit growers in Thailand, especially during the pandemic where export trade has been impacted.

Makro was one of Thailand’s first wholesalers to develop an omnichannel business in 2019, and it has begun to offer sales of fresh fruit online.

“Makro is honoured to receive the Produce Retailer of the Year Award. It is a great encouragement for us to continuously strengthen our quality and deliver a better customer experience both online and offline,” said Chearavanont.

“The award is also proof of Makro’s commitment to be a trusted partner to customers. This is only made possible by the dedication of our commercial team, suppliers and growers as well as our store operation staff in 147 locations. They all work tirelessly to ensure only fresh and high-quality fresh produce is delivered to our customers.” 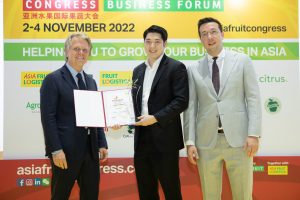 The Impact Award was presented to Nick Kukulan and Paramount Export Company in recognition of their pioneering efforts to develop the fresh produce trade into Asia.

Kukulan retired as president of Paramount Export in October 2020 after 43 years with the company, and the US-based fresh produce distributor celebrated its 80th anniversary in 2019.

Founded in 1939 to represent US West Coast growers and expand international market opportunities for them, Paramount Export helped to pioneer the introduction of quality fresh produce by air and sea freight to global markets under the leadership of Nick’s father, Joe Kukulan. Joe played a key role in opening-up markets in Asia, with Nick building on those efforts when he joined Paramount Export in 1977.

The company developed a high level of expertise in logistics and produce selection for customers’ specific requirements. It later helped to develop the range of global supply sources for markets in Asia by establishing grower relations throughout the world, including Australia, Chile, Egypt, France, New Zealand, Peru, South Africa, Spain and Turkey.

Building long-term relationships with retailers, importers and distributors based on integrity and service has been key to Paramount Export’s success. The company focuses on being ‘the eyes, ears, and taste buds’ for its customers, as Kukulan describes it, demonstrating the value of the middleman in the fresh produce trade. 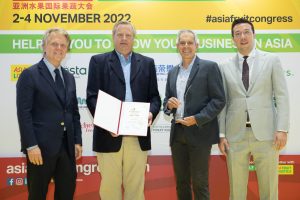