Advertisment
“In this 2020-21 season, Ambrosia™ sales have been very dynamic from the first moment, both in Spain and in Italy,” said Marco Rivoira of the Piedmontese group, “but such an […]
Wed 09/06/2021 by Richard Wilkinson 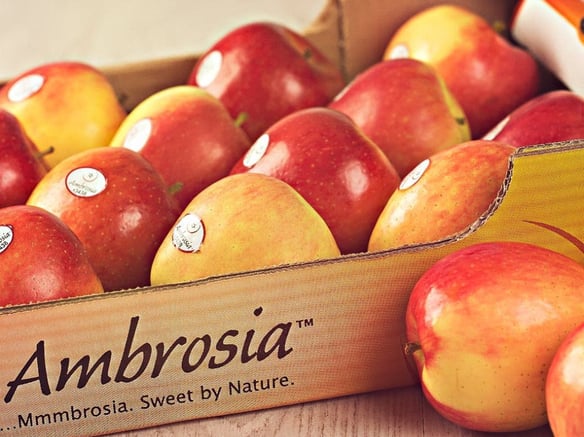 “In this 2020-21 season, Ambrosia™ sales have been very dynamic from the first moment, both in Spain and in Italy,” said Marco Rivoira of the Piedmontese group, “but such an early end to the season was a surprise. Initially we had planned to cover the entire month of April with the usual supplies, but the main markets already showed a higher demand than expected at the beginning of 2021, so we decided, in agreement with our clients, not to stop sales and close the season in advance.”

“The German market has also undoubtedly been a very positive surprise,” said Fabio Zanesco, VIP Commercial Director, “given that the reception from customers and consumers was continuous and higher than expected. We knew we could do it well, but such a stable demand for us is confirmation of a variety that has established itself on really solid foundations. In Scandinavia, we have expanded the distribution and, without a doubt, we could have done more, but we have kept our commitments in the different markets in balance, and that was the objective to be achieved.”

It should be noted that in Asia, however, the campaign was reduced and discontinuous, due to the problems caused by the pandemic, logistics and a market that was only momentarily receptive. “Nevertheless, we still believe that the countries of Southeast Asia are very interested in the taste profile of Ambrosia™,” said Rivoira, “and therefore we have work to do to relaunch the commercial strategy in the next season, in a way compatible with the available volumes of the required quality. This spring is proving to be very difficult climatically in all the production areas, so over the next few months we will evaluate the best way forward.”

From the point of view of marketing and positioning, Ambrosia ™ has undoubtedly found more spaces for development in Europe, also during the past season, taking a qualitative leap in communication and not only in direct distribution of the product.

In Spain, together with Don Pawanco, a television campaign was launched for the first time in three periods (November, January, March) that had an exceptional response from consumers, with a greater demand especially through the traditional channel, of which our wholesale customers have been able to benefit from. Social networks and influences continue to respond with encouragement, betting on recipes and a healthy way of life and above all, with the guarantee of being prescribing a club apple truly for the taste of the whole family.