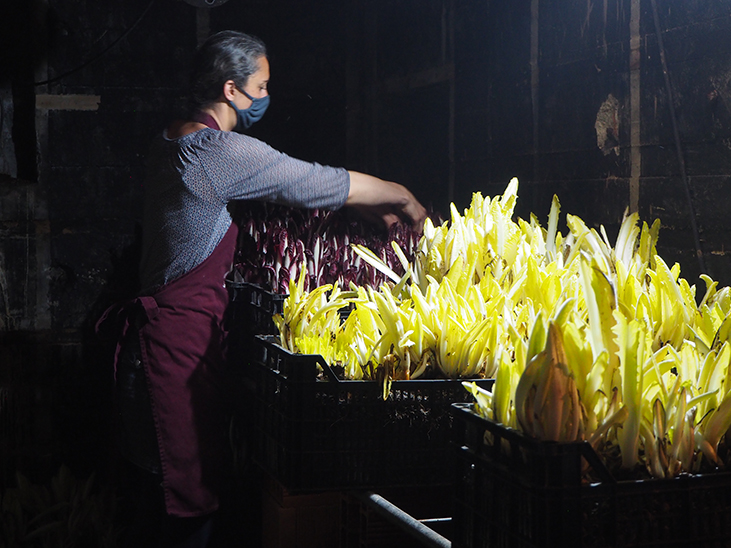 The micro-events were very diverse, with attendees invited to notably visit an endive cultivation inside an old German blockhouse.

The micro-events were very diverse, with attendees invited to notably visit an endive cultivation inside an old German blockhouse.

It must seem strange to read this news when France is still under lockdown, yet the event was quite legal, with 2,000 citizens allowed to discover agriculture in its many forms.

“The event, which we have been planning since November 2020, was able to continue because we divided it into 60 micro-events scattered throughout the city, and a lot of them were outdoors,” said Marie-Agathe Widlöcher, one of the organisators.

It was also necessary to meet strict sanitary conditions, which meant that almost every event received no more than six people, including the facilitator, with reservations made beforehand and mask-wearing was mandatory.

It was the event’s third edition in Bordeaux after a two-year gap. Marie-Agathe Widlöcher explained that they had been planning to

“do it differently from previous years, long before the second and third waves of the pandemic. For example, several associations of shared gardens, farms or agri-food professionals were contacted to make direct visits to their workplaces.”

“The goal is to reconnect people to nature just as they connect to their WiFi by raising awareness of the soil and its properties.”

That’s why his association opened its doors to the shared garden it had been taking care of to show it off to city-dwellers for a weekend.

“Our goal is to connect farmers and citizens, so the latter can gain a better understanding of the food cycle right down to when it arrives on their plates. The cycle from production to purchasing might involve the MIN* of Bordeaux or a solidarity grocery store in the neighbourhood,” said Widlöcher.

The events were very diverse, with attendees invited to visit La ferme de Pauline in Lormont, Le jardin de Quentin in Eysines (a traditional farm), or an endive cultivation inside an old German blockhouse.

“Farmers were very interested in the event because they want citizens to have a better understanding of their work. We would have liked to have had more farmers contributing to the event, but it is a big time for them and not everyone was able to attend. As they were micro-events of half an hour or an hour, this facilitated their participation. And we are already very grateful to all those who were able to take part,” said Widlöcher.