There has been a dramatic increase in freight shipped via the Northern Sea Route as a result of the rising temperatures experienced in the Arctic Circle, according to the Russian […]
Mon 10/09/2018 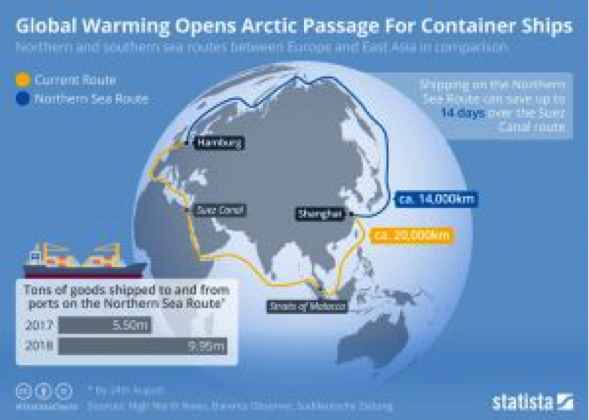 There has been a dramatic increase in freight shipped via the Northern Sea Route as a result of the rising temperatures experienced in the Arctic Circle, according to the Russian Ministry for Maritime and River Transport. This year has been a particularly warm one for the Arctic Circle, with several instances of temperatures exceeding 30ºC. This has meant that up to August 24th of this year, cargo in the region’s ports was reported to total just under 10 million tons, which constitutes a rise of 81% on last year’s level of 5.5 million over the same period. The world’s leading shipping companies are now turning ever more frequently to this route as a means of shortening transit times by as much as two weeks, even though the passage is only viable for three months of the year. Indeed, Maersk has announced that it is to send a 3,600 container capacity ship though the sea passage on a test run. The Russian Government hopes that the Arctic route will be able to compete with the southern route through the Suez Canal and Straits of Malacca. As the Northern Sea Route runs through Russian waters, from Murmansk near Russia’s border with Norway as far as the Bering Strait in Alaska, all transiting ships require a permit from the Russian authorities. There are severe cost considerations with this route however as ships must be accompanied by a nuclear-powered icebreaker.

The illustration below shows how a container-ship would travel between Europe and East Asia, using Hamburg and Shanghai as example ports. A ship sailing between those two cities on the Northern Sea Route would travel about 14,000 km, which is 6,000 km less than via the southern route.

Category: Uncategorized
Tag: Northern Sea Route; Global warming; Shipping
We use cookies on our website to give you the most relevant experience by remembering your preferences and repeat visits. By clicking “Accept All”, you consent to the use of ALL the cookies. However, you may visit "Cookie Settings" to provide a controlled consent.
Cookie SettingsAccept All
Manage consent