Mercadona was by far the the leader but Carrefour Hiper, Dia, Eroski Supers and Lidl came next in holding the biggest share of Spain’s fast-moving consumer goods market last […]
Mon 16/02/2015 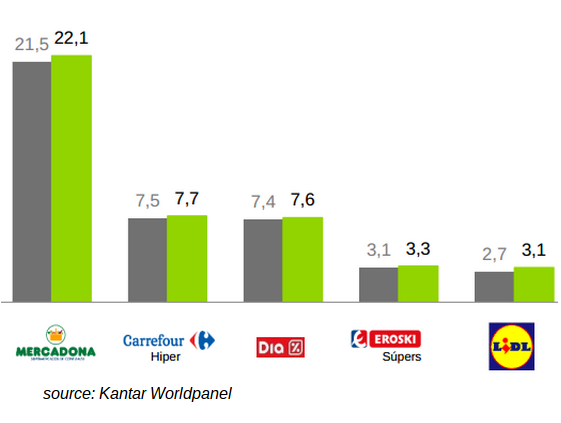 Mercadona was by far the the leader but Carrefour Hiper, Dia, Eroski Supers and Lidl came next in holding the biggest share of Spain’s fast-moving consumer goods market last year, according to a report by Kantar Worldpanel.

Mercadona’s market share was triple that of its nearest competition, Carrefour Hiper, and it also dominated with its 17.5% share of perishables, climbing 6% on 2013.

The ten retail chains together accounted for 52.9% of total FMCG sales in Spain last year. All except Alcampo either improved or maintained their market share relative to 2013.

According to Kantar Worldpanel consumer insights director César Valencoso, last year was one of the worst for Spain’s FMCG sector, which lost 2.9% in sales value and 1.8% in volume overall – and he said the fresh produce category was largely to blame.

Indeed, the perishables category saw relative declines of 4.8% and 3.1% and the sales volume this year is poised to drop again, specifically by 1.1% on 2014, while most other categories are poised to improve, he said.

source: Kantar Worldpanel based on sample of 12,000 households which reported daily to it on what they bought and where.

Category: Uncategorized
Tags: FMCG, Mercadona, rankings, Retail, Spain
We use cookies on our website to give you the most relevant experience by remembering your preferences and repeat visits. By clicking “Accept All”, you consent to the use of ALL the cookies. However, you may visit "Cookie Settings" to provide a controlled consent.
Cookie SettingsAccept All
Manage consent