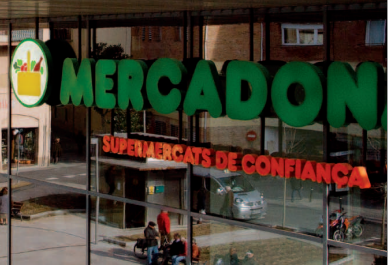 Announcing the results last month, CEO Juan Roig said they were, without a doubt, due to the hard work of Mercadona’s 74,000 workers, 120 integrated suppliers, and the primary sector serving its sustainable agri-food chain.

In the report, Mercadona highlighted its commitment to using “raw materials of Spanish origin whenever viable” and its new system for managing the selection of fresh products, which was initiated in 2011 to strengthen local economies and promote Spanish agricultural products. In this context, it said in 2014, Spanish products it purchased included:

Under its new fresh products sales models, by the end of 2014, all Mercadona supermarkets had implemented new bakery sections and locally-sourced fruit and vegetable sections.

Mercadona said the new model had allowed for the strengthening of local economies, as well as boosting locally sourced products, which were “well accepted by clients.” It had also helped increase its fresh product market share by 5%.

In 2015, Mercadona plans to invest approximately €650 million, destined mainly towards the opening of 60 new stores, the refurbishment of a further 30, continuing the building of the logistics block in Abrera (Barcelona), and the start of a new logistics block in Vitoria-Gasteiz.

Introduced in 2010, the Caspopdona project is intended to develop Mercadona’s Sustainable Agri-Food Chain. Specific applications under this initiative include:

El Perelló Cooperative: The integrated supplier-manufacturer Pinchos Jovi has reached an agreement with this cooperative for sowing whole fields of peppers on summer, which it then uses to make its brochettes. In return for the agreed volumes and quality, Pinchos Jovi guarantees fixed prices and stability, which has enabled the El Perelló Cooperative (Valencia) to plant 5,600 hectares of green peppers, 3,600 of its own and 2,000 belonging to the Viver cooperative, amounting to the production of approximately 140,000 kilos of green peppers in Valencian fields.

Dafran&Darzoves: Mercadona has signed a contract with this tomato-producing company based in Almeria, which supplies it with 140,000 kilos of tomatoes per week. The agreement reached in 2014 has enabled this company to increase its turnover by 50%, by keeping its facilities operating throughout the year, and to employ twice as many people, with as many as 250 employees.

Mercadona’s logistics network now covers a total area of over 847,000 sqm. Nearly a decade ago, the company decided to innovate in its logistics network by developing and introducing totally automated intelligent warehouses, which eliminate “handling or overstrain by employees, helping to prevent and reduce the risk of industrial accidents, as well as increasing productivity and efficiency.”

Mercadona now has three such intelligent warehouses – in Ciempozuelos (Madrid), Riba-roja de Turia (Valencia) and Villadangos del Paramo (Leon) – and construction of a fourth, in Abrera (Barcelona), is due to be completed in 2017.

Automated storage and preparation of pallets

In 2013 the company also installed the so-called PPG (Picking Puente Grua) automated gantry crane in its logistics block at Guadix (Granada), a system for automated storage and preparation of pallets of meat, fruit and vegetables in which it invested €5 million.

Category: Uncategorized
Tags: Mercadona, Retail, Spain
We use cookies on our website to give you the most relevant experience by remembering your preferences and repeat visits. By clicking “Accept All”, you consent to the use of ALL the cookies. However, you may visit "Cookie Settings" to provide a controlled consent.
Cookie SettingsAccept All
Manage consent