Landfruit consists of seven producer partners who came together under a common vision: producing fruit of the highest quality and delivering it through a 100% personalised service. Their fruit and […]
Wed 22/06/2016 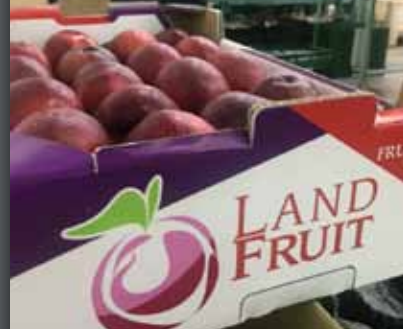 Landfruit consists of seven producer partners who came together under a common vision: producing fruit of the highest quality and delivering it through a 100% personalised service. Their fruit and vegetable producers’ organisation is called LEMA and brings together supplies from three regions: Seville, Huelva and Murcia. Stone fruit, asparagus, cucumber and mini cucumbers are the main reference items. Although Landfruit is a really young company and has only been in business for a year, its management is endorsed by the wide-ranging knowledge of the group members. They are all expert professionals with a long-standing track record in the sector. Director Antonio Chavero, the head of this new initiative, said: “We have very few suppliers at source, so that we can carefully control the production quality and act more swiftly when it comes to taking decisions. Nor do we have many customers at our destinations, and to be able to respond accurately to their needs, we create programmes tailored to each client.” This season, they have invested 3 million euros to remodel the main handling facility. “Work on the new facilities is almost completed and there we will have the necessary means that we did not have in previous years to be able to provide the highest quality service,” said Chavero. In 2015 Landfruit traded and exported to several destinations in the European Union and Eastern Europe, with 13,000 tons from Extremadura and Andalusia and roughly 8,000 tons from Murcia. In addition, this year they are starting exports to overseas markets such as Brazil, India and the UAE. Chavero revealed a plan to implement 4-year scheme to increase supply from partners and reach 20,000 tons of stone fruit in Extremadura, as well as 1,500 tons of asparagus and 3000 of cucumber. To this, they expect to add 8,000 tons from other areas with collaborating farmers.

Category: Uncategorized
Tag: Landfruit
We use cookies on our website to give you the most relevant experience by remembering your preferences and repeat visits. By clicking “Accept All”, you consent to the use of ALL the cookies. However, you may visit "Cookie Settings" to provide a controlled consent.
Cookie SettingsAccept All
Manage consent