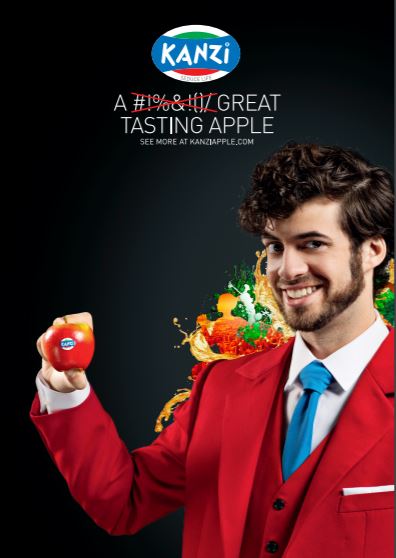 A clever new campaign – with ‘censored’ and ‘uncensored’ clips – kicks off the 2016/17 Kanzi apple season in Europe.

All about seducing life and living in the now, the cheeky videos star the red-suited Kanzi Man but with the hook – designed to drive consumers there – that ‘uncensored’ versions can be seen on the Kanzi website.

Already being rolled out on YouTube and Facebook, the digital campaign has huge viral potential and aims to reach over 55 million consumers all over Europe, said Henry Müller, CEO of the variety manager GKE NV.

It will be backed by promotions on the radio, billboards, and in-store with POS material and consumer activities.

To achieve this, it has made the consumer its main focus along with ensuring the continuous supply of fruit with high class appearance.

Campaign launch at Fruit Attraction 2016 in October in Madrid

Its success is largely explained by the fruit’s flavour – setting it apart from other apples – and its crunchy yet juicy flesh, as well as a shiny, bright-coloured skin.

Among Kanzi’s advantages for retailers are its long shelf-life, popularity with consumers and consistent quality, Müller said. On the latter, he said good growing conditions in all production regions have indeed delivered a high quality harvest this season.

Retail chains can achieve sustained sales levels with an attractive margin and benefit from the brand’s intensive marketing activities. Supermarkets are assured of year-round availability and a supply that is increasing every year, he said.

Category: Uncategorized
Tags: apple brands, apple marketing, apples, GKE NV, Henry Müller, Kanzi, Nicoter apple variety, promotion & marketing, video campaigns
We use cookies on our website to give you the most relevant experience by remembering your preferences and repeat visits. By clicking “Accept All”, you consent to the use of ALL the cookies. However, you may visit "Cookie Settings" to provide a controlled consent.
Cookie SettingsAccept All
Manage consent