While the 11th Interpoma – the apple industry’s international trade fair – was gearing up, the first Interpoma Technology Award was ceremonially presented on the opening day yesterday. The award […]
Mon 19/11/2018 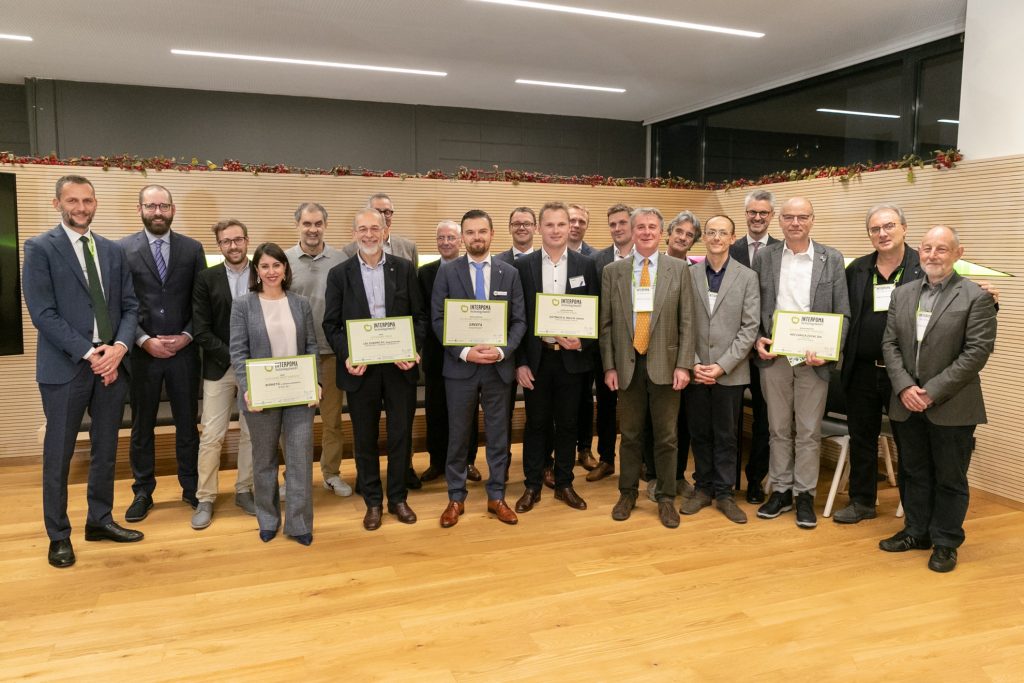 While the 11th Interpoma – the apple industry’s international trade fair – was gearing up, the first Interpoma Technology Award was ceremonially presented on the opening day yesterday. The award recognizes innovative technologies and machines exhibited at the trade fair and is organized by Fiera Bolzano with the Faculty of Science and Technology at the Free University of Bozen-Bolzano and the Italian Society of Fruit, Vegetable and Flower Growers (SOI).

The jury is headed up by Massimo Tagliavini and includes researchers and university professors from Italy and around the world. In October and November, the jury members studied and assessed the 25 participating companies in detail and reached a final result yesterday after inspecting the most interesting innovations at the companies’ stands.

The first Interpoma Technology Award in the FIELD category (innovations in production and crop protection) was presented to the Biogard Division of CBC Europe with “Mister Pro + Isomate® CM Mister 1.0”. The jury’s reasons were as follows: “By taking an existing technology of pest control using mating disruption and adding a combination of pest phenology, real-time environmental monitoring and microcomputing control hardware and software, CBC Europe have developed a simple technology that supports a sophisticated, advanced pest control system. This environmentally responsive technology will overcome the multiple shortcomings of current mating disruption technologies”.

The award in the POST HARVEST category went to BIOMETIC, a division of MICROTEC, with “Q Eye XP”. The jury stated: “The Q Eye XP  by BioMetic is a scanner used in the packaging line that is effective in detecting internal fruit defects. Its innovative approach involves the use of X-rays, an emerging technology not yet practically applied in the fruit industry. It complements other already established multi-sensor quality scanners, thus reducing post-storage waste with benefits for consumers. These technologies can also be used to measure additional parameters in other fruit species, and thus represent an additional value. It is expected to impact post-harvest handling and quality evaluation in the apple fruit industry”

In addition to the two winners there were also special mentions: in the FIELD category the GOTRACK company from Poland was recognized for its own “GOtrack Remote Control”, while in the “POST HARVEST” category special mentions went to GREEFA for its “SmartPackr2” and Meccanica Zucal for its packaging robot “Polus 48”.

The two winning companies received a package of prizes valued at € 5,000, including a certificate, financing for a 30-second product video and a Fiera Bolzano advertising package for Interpoma, to boost the visibility of the award-winning products at the trade fair.

“As a jury, we are delighted with the great public interest in the Technology Award,” says jury chairman Massimo Tagliavini. “We were impressed by the variety of products from the participating companies. The wide range of technological innovations on display can help make the apple industry more environmentally friendly and sustainable in its many facets – from the field to the consumer, and even the profitability of the stakeholders in the sector.

The Interpoma Technology Awards were presented at an award ceremony in the Südtirol Lounge, attended by the jury, the board of management of Fiera Bolzano and representatives from the international trade press.

Category: Uncategorized
Tag: Interpoma 2018; Technology Award; Bolzano
We use cookies on our website to give you the most relevant experience by remembering your preferences and repeat visits. By clicking “Accept All”, you consent to the use of ALL the cookies. However, you may visit "Cookie Settings" to provide a controlled consent.
Cookie SettingsAccept All
Manage consent