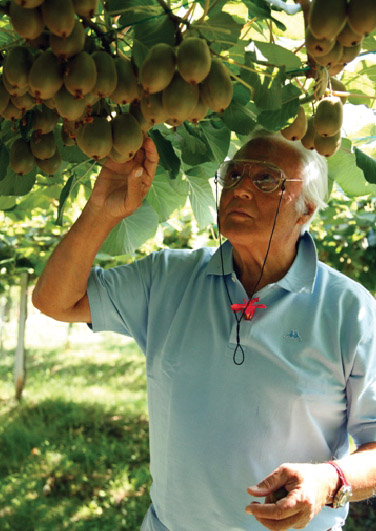 Gullino Import Export S.r.l. is an Italian company that only exports Italian-grown products. Its core business is kiwifruit, with seasonal export volumes of around 30,000 tonnes (35,000 in 2012/13, 32,600 in 2011/12 and 30,000 tonnes the season before that). Its next-biggest export products are peaches and nectarines (5000 tonnes in 2012/13, 5200 tonnes the year before and 6000 in 2010/11). The third product by volume is plums, at 2000 tonnes last season and 1500 tonnes in each of the previous two.  “We are continuing to run trials, both in the field and in the packhouse, to develop our know-how on the yellow kiwifruit variety Soreli in order to improve the product’s quality and shelf life during both refrigerated storage and transport (particularly by sea)”, commented the commercial manager, Giovanni Gullino.
Gullino Import Export S.r.l exported around 41,000 tonnes, almost all grown in Piedmont, during the 2013 season. This year the firm expects to export 28,000 tonnes of kiwifruit. Crop volumes have been hit by a bacterial disease in Piedmont and above all by lower yields in the Venetian crop caused by root suffocation. The United States and Canada are showing good resilience this season, although the profitability of these markets has been affected by particularly unfavourable exchange rates. In the 2013/14 season, North America is taking about 18% of the firm’s exports. North Africa and the Middle East account for around 8% of turnover, followed by Eastern Europe at 5-6%. The main export market is still western Europe, however, which takes 40% of the firm’s shipments. “Most of our business has focused on closer destinations, at the start of the season at least, though we have kept up the programs we have underway with loyal clients that involve long journey times”, said Giovanni Gullino. Chile’s product shortage for the coming season hopefully promises a very active European market during the second part of the year.
A suitable grader has been acquired for in-line packing of delicate fruit in order to improve the quality of some presentations. Both the packhouse and storage company and most of the growers are certified to international standards such as BRC, IFS, TN, Globalgap and Grasp.
Gullino Import Export S.r.l. is very conscious of sustainability and has been working for some years now on a project called Save the Planet that aims to lead, in a few years’ time, to using only electricity generated from renewable sources throughout the production process. Currently the company can boast that 40% of the electricity it uses comes from renewable sources.

Category: Uncategorized
Tag: Kiwi
We use cookies on our website to give you the most relevant experience by remembering your preferences and repeat visits. By clicking “Accept All”, you consent to the use of ALL the cookies. However, you may visit "Cookie Settings" to provide a controlled consent.
Cookie SettingsAccept All
Manage consent