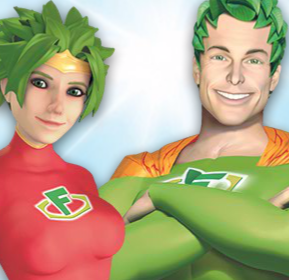 The third three-year programme of the Fruitness, enjoy it! project, promoted by the CSO Fruit&Vegetable services and co-financed by the European Union and the Italian Government with the aim of encouraging young adults in the United Kingdom, Poland, Denmark, Sweden and Germany to include more fruit in their diets, is about to end on a high note.

In fact, January saw an intensive promotional campaign dedicated to one of the project’s core fruits – the pear. The Fruitness, enjoy it! project has been encouraging fruit-eating through an approach based on fun and enjoyment since 2006. Throughout its nine years in operation, the project has included initiatives such as the creation of fruit-themed on-line games and smartphone apps, organising point-of-sale tastings and developing tools to make greengrocery departments more attractive and stimulating.

Pears, popular with adults and children alike for their sweet flavour and soft consistency, will be the focus of a tasty road show during the European winter, involving four German cities: Hannover, Göttingen, Münster and Essen. To reach even more people, to coincide with the poster campaign a large number of “Fruitness, enjoy it!” promoters will be in the busiest parts of these four German cities, giving away fruit-themed promotional gifts, answering questions and queries and above all inviting consumers to taste Abate Fétel pears.

Category: Uncategorized
Tags: enjoy it!, Fruitness, pears, promotion
We use cookies on our website to give you the most relevant experience by remembering your preferences and repeat visits. By clicking “Accept All”, you consent to the use of ALL the cookies. However, you may visit "Cookie Settings" to provide a controlled consent.
Cookie SettingsAccept All
Manage consent