© Dazzle   New Zealand’s newest apple variety Dazzle has arrived in China with large celebrations at wholesale markets as importers and retailers race to get a taste. It’s the […]
Thu 29/04/2021 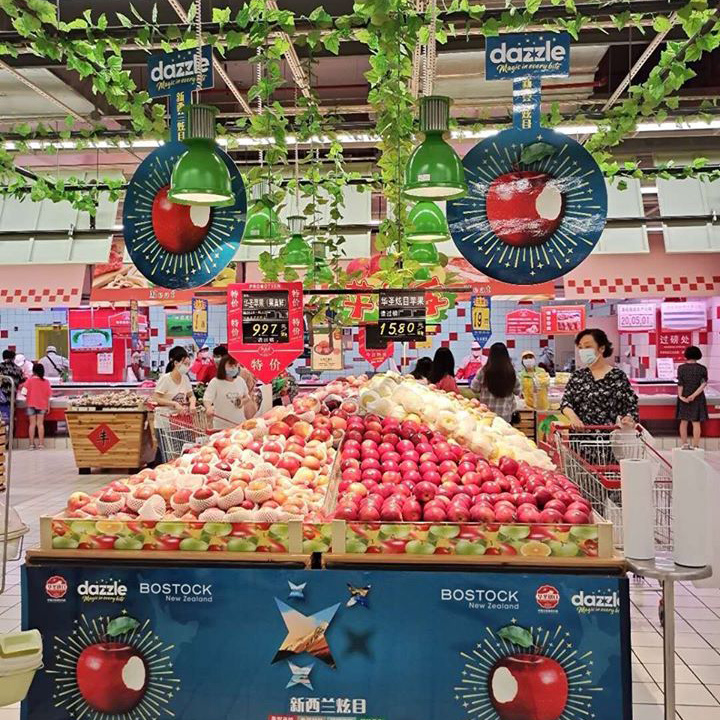 New Zealand’s newest apple variety Dazzle has arrived in China with large celebrations at wholesale markets as importers and retailers race to get a taste. It’s the first year that there have been large volumes of Dazzle apples available for Chinese customers and they weren’t wasting any time to get their hands on the delicious, red, sweet apple from New Zealand.

Joy Wing Mau’s International Buyer Li Bin was involved in the launches at Guangzhou and Shanghai wholesale markets and says it is very exciting to have access to larger volumes of Dazzle Apples for Chinese consumers this year. “We are so happy and very excited to introduce Dazzle apples. Dazzle is a variety which we know has been specifically developed for the Asia market, with its sweet, crunchy and delicious taste, as well as good storability. There is a strong brand and it’s great to be part of a successful launch which will help us promote Dazzle to Chinese consumers. We value our strong relationship with New Zealand apple growers and suppliers,” said Bin.

The New Zealand Trade and Enterprise Trade Commissioner, Pete Frost presented at the celebrations and cut the ribbon, officially launching Dazzle apples to the China market, saying New Zealand’s apple industry is rated the best in the world. “New Zealand apple growers are agile and innovative. They use world-leading science and technology to deliver to ever-changing customer demands. The New Zealand horticulture industry is investing in new varieties, which are earning premium prices in the global marketplace,” said Frost.

Dazzle Apples were developed over 20 years by Plant and Food Research – a New Zealand Government Crown Research Institute. They are exclusively available from a selected group of exporters and are set to be one of the most popular and largest volume apples coming from New Zealand.

Category: Uncategorized
Tags: Apple, Asia, China, Dazzle, New Zealand
We use cookies on our website to give you the most relevant experience by remembering your preferences and repeat visits. By clicking “Accept All”, you consent to the use of ALL the cookies. However, you may visit "Cookie Settings" to provide a controlled consent.
Cookie SettingsAccept All
Manage consent