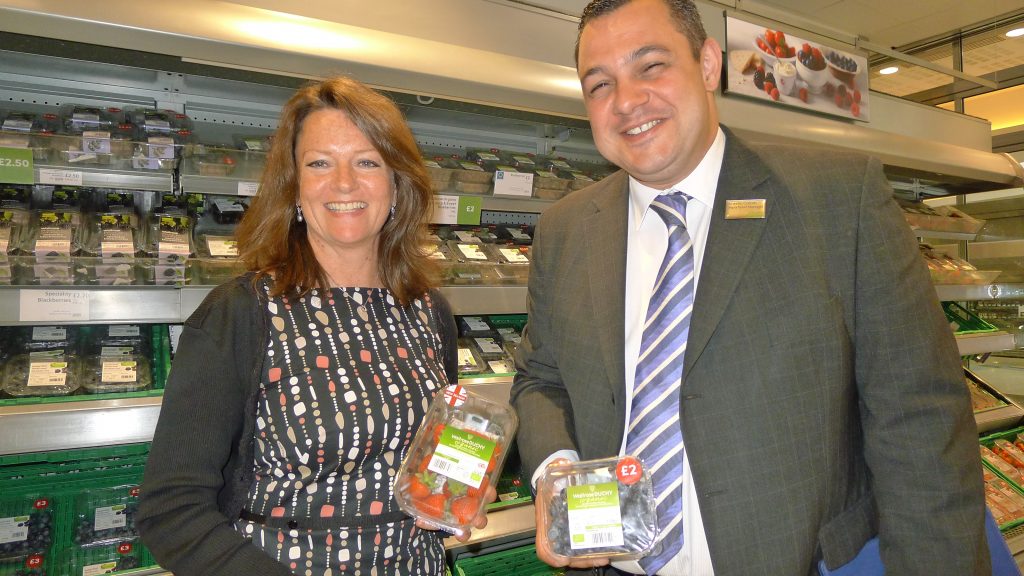 Waitrose’s three-storey, 73,000 sq ft. Canary Wharf branch is its biggest store and the one with the highest sales.

Officially a ‘Food, Fashion & Home’ store, it also has one of the biggest fruit and vegetable sections of all Waitrose branches. About 15% of the store’s turnover is from sales of fruit, vegetables, salads and flowers.

ED toured this Waitrose flagship store in early June as part of the London Produce Show and spoke to Buying Manager for fruit Jocelyn Clarke and Department Manager Anselm Colom.

Clarke said Waitrose is doing particularly well in produce, highlighting that while the retailer holds about a 5% share of the UK grocery market overall, its market share for fresh produce is higher, typically around 8%. “In terms of location we’ve got the best of all worlds here,” Colom told ED about the Canary Wharf branch, “we’ve got many customers who do a big shop, and hundreds of thousands who do small top-up shops, we’ve got people passing by, local residents, workers, people travelling into London – all sorts of different demographics.

“Our biggest challenge is physically trying to stock all the shelves all the time – it’s absolutely relentless but a nice problem to have.”

A big focus on fresh produce

Fresh produce is one of 13 sections in the store and includes the food-to-go offering. Clarke said there is saying in retail that if you don’t get produce right then customers go no further. At Canary Wharf, the fruit and vegetables section sits at the front of the store and there is a big focus on it, she said.

There are typically two layouts for the fruit and vegetable section – a summer and a winter one. The summer layout started in mid-April with soft fruit moved to the front, apples and citrus cut back a little and moved to the back, and more space for exotic and stone fruit and less for vegetables. “But we wouldn’t dream of moving potatoes, bananas or salads, they stay where they are all the time,” Colom said.

The top sellers: berries and citrus

Clarke said that over the course of a year, the branch’s top sellers are berries but at Christmas, citrus is the clear-cut best seller, as in the UK it is traditional to include some in Christmas stockings. The UK, Spain and South Africa are the main sources of the fruit in the store.

The berries cooler, located on the right at the very front of the store over summer, was rarely without a customer during ED’s visit and is replenished several times during open hours. Clarke said there is still a lot of opportunity to expand sales of berries – particularly blueberries – as the household penetration of this product is still relatively low.

Organic produce accounted for 5-6% of total produce sales in the week ED visited. Colom said it used to generally be a bit higher but some weeks can still get up to about 12%.

Waitrose has a high market share in organic which is going from strength to strength. The new Waitrose Duchy Organic design was seen in store on berries. Clarke said this design would be seen on other fruits in the coming weeks.

While private label – also known as own brand – products account for about 45% of Waitrose products overall, in the case of fresh produce this soars to 90-95%. Some brands are seen in salads, then there is also co-branding of Waitrose and Pink Lady, which sells well. Otherwise it is all about the Waitrose brand

Clarke said that Waitrose branches in country locations do see interest in local produce, as do stores in Scotland, such as for Scottish-grown strawberries.

Grapes must have crunch, texture, flavour

At the time of speaking to ED, Colom said the grapes on the branch’s shelves included the black seedless Sweet Sapphire, seedless white grapes including Sugraone and Prime,  and Early Sweet, and in red seedless, Flame.

“We look for crunch, great texture and really great flavour – a lot of aromas and sweet/acid balance,” Clarke said. “Cotton Candy was a good seller last year and we’re going to do more of it this year. Sable’s done exceptionally well and Italia is very popular.” She said Waitrose mainly sells seedless grapes, typical of the UK market. It doesn’t sell Red Globe and stocks only a couple of seeded varieties over the course of a year.

Colom said Waitrose uses an elaborate algorithm-based ordering system based at its head office so people in positions such as his no longer do ordering. The system factors in weather data, sales history, demand, space at a branch, and so on and “works out what we can sell for every single product.”

His priority is to ensure the stock thus ordered indeed reaches the store shelves. “It’s critical to do an off-sale check before we start in the morning, so we know what don’t have.” Also, given the short shelf life of fruit and vegetables, date rotation and quality are critical. “We do quality checks all the time.”

Much attention is also paid to ensuring the country of origin is on the ticket for each item, a legal requirement, “that’s absolutely critical,” he said.

Most of the stock comes into the branch at night. Three deliveries of fruit and vegetables take place then, and another mid-afternoon, as well as 3 ambient deliveries, and various other special and additional deliveries.

A maximum of about 7-8 people in total work in Colom’s Fresh produce section at one time and while the shelves are filled through the night, during open hours they spend most of the time replenishing stock.

Colom said he is proud of the quality of the produce on the shelves and, in particular, of the deep knowledge of some of the partners (staff) on the section, such as on the different fruit and vegetable seasons. If you want to know about new Jersey potatoes in late April/early May, British asparagus in May, strawberries in June, certain apples in June and July, and so on – look for the person wearing the ‘fruit, veg & flowers specialist’ apron.

Category: Uncategorized
Tags: Canary Wharf, JB, London Produce Show, Retail, Waitrose
We use cookies on our website to give you the most relevant experience by remembering your preferences and repeat visits. By clicking “Accept All”, you consent to the use of ALL the cookies. However, you may visit "Cookie Settings" to provide a controlled consent.
Cookie SettingsAccept All
Manage consent