EU grape production is expected to be up 7.1%, mainly due to larger harvests in the continent’s largest producer Italy (+13.3%), despite humid conditions during flowering and summer rains. There […]
Wed 14/11/2018 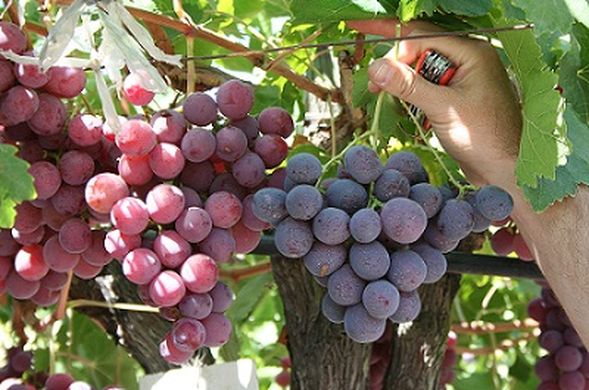 EU grape production is expected to be up 7.1%, mainly due to larger harvests in the continent’s largest producer Italy (+13.3%), despite humid conditions during flowering and summer rains. There are also production increases in France (+23.8%) and Romania (+1.3%), which more than make up for drops in Portugal (-26.4%) and Bulgaria (-4.2%) due to adverse weather conditions. Volumes in Greece and Spain are expected to remain flat. Overall, fruit quality is forecast to be good with higher sugar content due to hot temperatures in July and September. The production area is estimated to continue its upward trend, with new investments in seedless varieties (Sugraone, Crimson, Thompson and Sublime).

Italy remains the largest table grape producer in the EU-28, followed by Greece and Spain. Table grape production is concentrated in southern Italy, mainly in Apulia (70%) and Sicily (20%). The main seeded varieties are Italia, Victoria, Palieri, and Red Globe, which account for 70% of the table grape area.

Fresh grape consumption is expected to recover in line with Italy’s increased crop size. Imports from third countries in the Southern Hemisphere during the first half of the calendar year represent around 25% of total consumption. Italy is the leading table grape consumer, followed by Germany, the UK, Greece, France, Spain, Romania, the Czech Republic and Portugal. Consumers are increasingly demanding seedless varieties due to their quality and convenience and a greater focus is being placed on late varieties (Crystal and Princess) to extend the offer calendar.

Category: Uncategorized
Tag: EU; Grape; 2018
We use cookies on our website to give you the most relevant experience by remembering your preferences and repeat visits. By clicking “Accept All”, you consent to the use of ALL the cookies. However, you may visit "Cookie Settings" to provide a controlled consent.
Cookie SettingsAccept All
Manage consent