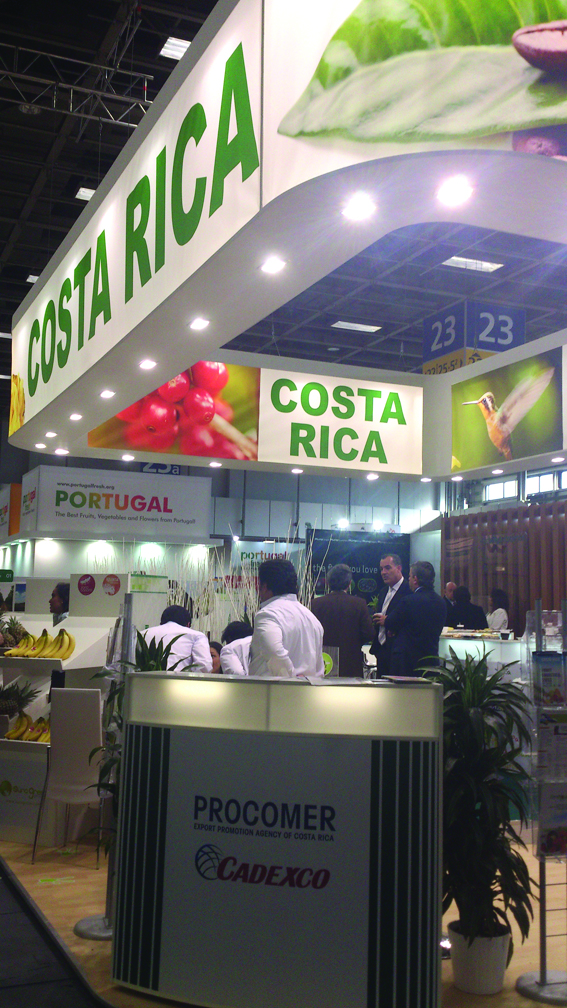 A campaign that focuses on the ecology and culture of Costa Rica – and its links to the country’s fresh produce sector – will form the theme of national export promotional agency Procomer’s 2014, beginning with its presence at the Fruit Logistica 2014 trade show in Berlin.
Launched during 2013, the Essential Costa Rica brand will be a key part of Procomer’s promotional strategy for the year, which will once again endeavour to push the country’s fruits and vegetables into new markets.
According to Procomer’s Alvaro Piedra, the opening of new markets for Costa Rican fruits remains a central priority for Costa Rica’s government, with the organisation having launched a promotional drive in Peru to complement its existing South America strategy, which is being carried out in conjunction with Chile’s department for commercial promotion.
Also in South America, Procomer plans to strengthen its promotional work in Colombia and Argentina, while it is currently studying the possibility of entering the Brazilian market.
At a European level, the organisation last year carried out its first commercial mission to Poland and is also developing ‘virtual’ missions to the Russian, Swedish and Lithuanian markets – three countries where until now Costa Rica has not had a direct export presence.
However, in spite of its export expansion, Piedra’s says the country’s fresh produce sector continues to face a number of major challenges, which need to be tackled to ensure further growth. “A country like Costa Rica faces several challenges – we have an economy with a very strong agricultural sector, but one which is in the process of transformation towards being service-based,” he says. “Our focus as a country is social wellbeing and this means there are social costs, added to which producing and maintaining employees are both expensive.
“We strive to maintain excellent quality standards and because of this we cannot compete on price, so we have focused on competing on quality.”
As well as this, Piedra says Costa Rican growers have to cope with high taxation on production and packing materials, an unstable exchange rate, high fuel and electricity bills, and an inadequate access to international shipping routes, particularly when it comes to accessing new markets.
In addition, he says internal transportation remains very costly within Costa Rica, while many producers are experiencing difficulties in obtaining credit from banks.
To combat such challenges, Piedra says Procomer offers diverse support programmes to the export sector, through which it looks to not only increase Costa Rican exports, but also increase the competitiveness of producers and exporters. “From personal consultants that teach entrepreneurs how to fill-out their own paperwork for exports to reduce costs in these areas to advice on the logistics of exports, finances and negotiations,” he explains.
“We have worked hard to diversify markets, establish export consortiums and added value programmes, among other support services. We also support the sector through different trade associations and discussion forums that cover all the issues of importance to producers.”
Export success
During 2012, Costa Rica produced more than 9.8m tonnes of fruits and vegetables, of which over 4.6m tonnes was exported. However, the volume of exports is continuing to increase – between 2009 and 2010, it rose 16.6% and shipments during the following 2010/11 and 2011/12 seasons also increased by 4% and 2.1% respectively.
As with previous years, bananas, pineapples, melons and watermelons accounted for the lion’s share of Costa Rica’s fresh produce exports, although the country also exported significant volumes of mangoes, yucca and plantain.
Working with ethical trading groups such as the Fairtrade Foundation and the Rainforest Alliance, Costa Rica has long been keen to stress its ‘green’ credentials – perhaps not surprising in a country where 26% of its total surface area (some 1.3m hectares) are legally protected areas. “Costa Rica is a country that focuses on the environment and social wellbeing where organic programmes are very important,” says Piedra. “These include the Ministry of Agriculture’s National Programme for Organic Agriculture, which promotes and strengthens sustainable organic practices. “At a promotional level, we have worked for a number of years with BioFach trade fair in Germany.
“However, the national market absorbs a lot of our production and the rest of what is available is also placed under contract with international buyers.”