Leading international food retailers Delhaize Group (Delhaize) and Royal Ahold N.V. (Ahold) are to merge into a company to be known as Ahold Delhaize. Announcing the merger agreement on Wednesday […]
Thu 25/06/2015 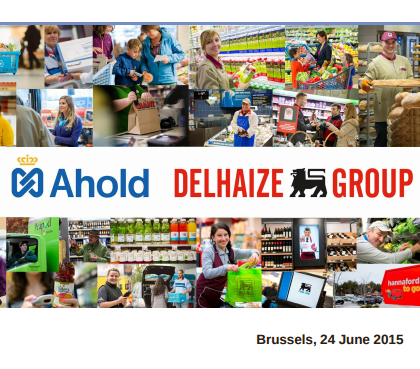 Leading international food retailers Delhaize Group (Delhaize) and Royal Ahold N.V. (Ahold) are to merge into a company to be known as Ahold Delhaize.

Announcing the merger agreement on Wednesday in a press release, they said the company will have enhanced scale across regions, market-leading retail offerings to serve customers’ changing needs, and a strong financial profile from which to fund innovation and investments in future growth.

Ahold and Delhaize businesses reported aggregated net sales of €54.1 billion, adjusted EBITDA of €3.5 billion, net income from continued operations of €1.0 billion and free cash flow of €1.8 billion last year. The new Ahold Delhaize enterprise will boast “a portfolio of strong, trusted local brands and serve more than 50 million customers every week in the US and Europe.”

Muller said it will create significant value for all stakeholders. “Ahold Delhaize aims to increase relevance in its local communities by improving the value proposition for its customers through assortment innovation and merchandising, a better shopping experience both in stores and online, investments in value, and new store growth,” he said.

Boer said the proposed merger “is an exciting opportunity to create an even stronger and more innovative retail leader for our customers, associates and shareholders worldwide. With extraordinary reach, diverse products and formats, and great people, we are bringing together two world-class organizations to deliver even more for the communities we serve. Our companies share common values, proud histories rooted in family entrepreneurship, and businesses that complement each other well. We look forward to working together to reach new levels of service and success.”

Category: Uncategorized
Tags: Ahold, Ahold Delhaize, Delhaize, Retail
We use cookies on our website to give you the most relevant experience by remembering your preferences and repeat visits. By clicking “Accept All”, you consent to the use of ALL the cookies. However, you may visit "Cookie Settings" to provide a controlled consent.
Cookie SettingsAccept All
Manage consent