Carrefour has consolidated its supply chain in China with the December 2 grand opening of its North-West China distribution centre in the Tianjin municipality. The centre is intended to be […]
Tue 15/12/2015 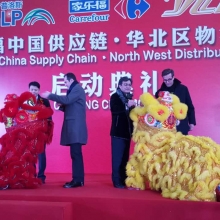 Carrefour has consolidated its supply chain in China with the December 2 grand opening of its North-West China distribution centre in the Tianjin municipality.

The centre is intended to be a bridge for Carrefour China’s supply chain in northern China, radiating out to the Beijing-Tianjin-Hebei integration economic cycle and Shandong, Shanxi and other provinces’ logistics and distribution network. It is also designed to increase distribution efficiency, support the business of stores, and boost regional economics.

It will use the Voice Picking System, achieving 99.997% in its picking accuracy rate. The trays utilise 100cm*120 standard operating procedure to reduce packaging and labour costs and improve efficiency; moreover, the centre is equipped with professional temperature controlled room which sustain temperatures of 18-22 degrees for the storage of alcohol, chocolate and milk powder.

By the end of 2016, Carrefour estimates it will have completed the establishment of 6 modern distribution centres in China, covering more than 200 hypermarkets in China to fully support its emerging businesses such as its e-commerce operations and “easy Carrefour” convenience stores.

Category: Uncategorized
Tags: Carrefour, China, distribution centres, North-West China, Retail, Tianjin municipality, Wuqing Economic Development Area
We use cookies on our website to give you the most relevant experience by remembering your preferences and repeat visits. By clicking “Accept All”, you consent to the use of ALL the cookies. However, you may visit "Cookie Settings" to provide a controlled consent.
Cookie SettingsAccept All
Manage consent