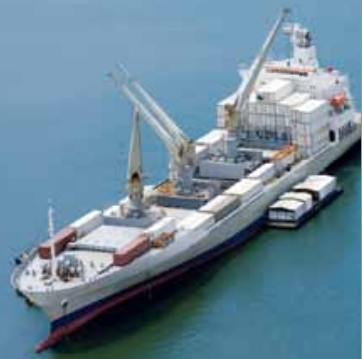 Shipping companies plying the banana export routes now also have to deal with the challenge of cutting costs in the face of falling ocean freight rates. Forging alliances will be a strong strategy to maintain competitive edge. One of the most important has been put forward by Maersk and MSC, with an alliance likely to move around a third of all banana cargoes through the world’s most heavily trafficked trade routes, which will bring enormous benefits, including a substantial reduction in operating costs.

“You need to think inside the box”, says Thomas Eskesen, Reefer Ship Managing Director from Maersk Line, one of the leading companies in the sector, operating in 252 ports worldwide, in 75 countries. Eskesen has analysed the challenges faced in an increasingly demanding world, where consumers expect very high standards in terms of the quality and speed with which produce reaches them. In this sense, he noted that in Maersk there is still room for improvement in some areas, while new services and tools need to be incorporated in order to stay competitive, although they do have interesting strategies to achieve this. “It’s not only about defence, but also playing offensively; you need to unite in order to expand.” He explains that this way of “thinking inside the box” means that it is necessary to examine ways to improve the company “from the inside”, considering all the resources available and the information to hand. “Today we are trying to identify the root of the problem, attempting to analyse the data that we have and solve the problem along with the client we provide our services to, working together with a common goal, which is the only way to keep the customer satisfied”, adds Eskesen.

Port of Antwerp is strategic entry point for banana in Europe

The main port of entry in Europe for Ecuadorian bananas is Antwerp in Belgium, located very close to the three major fruit consumer markets on the continent (Rungis, Venlo and Duisburg). Representative Germán Calderón explains how “72 hours before the ship’s arrival, the process of releasing the goods begins and, within 24 hours of unloading, the produce is ready for delivery to any of these three big markets, unlike the Port of Rotterdam, which moreover suffers congestion issues, so much so that this year a significant percentage of vessels which used to dock there had to do so in Antwerp.” He also mentioned that the arrival of the fruit through Belgium allows delivery of the produce between 6 and 12 hours faster than if it was channelled through any other port in northern Europe.

On the other hand, Russia, with steadily growing per capita annual consumption in recent years, represented a great opportunity for the Ecuadorian banana sector, which has enjoyed a growing share in this market and is now the leading banana exporter to this country. The fruit is mostly traded and shipped in refrigerated containers and mainly enters through the port of St. Petersburg. Forecasts for 2015 point to 41% growth in banana uptake by Russian traders, equivalent to 10.6 kg of banana annually per capita. Vasiliy Shultsev, Sales and Marketing Manager for Global Ports, notes that “the port of St. Petersburg has special facilities for handling this commodity. We handle all transport of the product, even to the remotest locations in Russia, ensuring that the quality is maintained.”

More routes with the Mediterranean

The Marseille-based company is also strengthening its web of routes between southern Europe/Morocco and northern Europe/Russia, on which it uses 1300 reefer boxes. CGA-CGM already owned MacAndrews, acquired in 2002, and has just bought OPDR – which operates similar shortsea services, particularly from Morocco, the Canary Islands and the Iberian Peninsula – from the German shipowner Bernhard Schulte. “This increases our capacity and our commercial strength,” highlighted Michel, “allowing us to develop services that can compete with road transport. Even if our rotation is less flexible than with HGVs, our ships offer cheaper and more environmentally-friendly solutions.” Sea freight currently accounts for 10% of Spain’s fruit and vegetable exports, for instance. At the close of 2014, OPDR should have carried over 240,000 TEU and MacAndrews over 290,000. CGACGM, which carries 10% of the world’s reefer traffic, will have turnover of $16 billion this year (€13 billion), slightly up on last year “although our margins are lower owing to market pressure,” Michel pointed out. CGA-CGM handles the rotation of 10.6 million TEU (traditional and reefer) around the world, in 1.54 million containers carried by 429 ships, 83 of them owned by the company, serving 450 ports of call in 150 countries.

Category: Uncategorized
Tags: bananas, Logistics
We use cookies on our website to give you the most relevant experience by remembering your preferences and repeat visits. By clicking “Accept All”, you consent to the use of ALL the cookies. However, you may visit "Cookie Settings" to provide a controlled consent.
Cookie SettingsAccept All
Manage consent