Press Release On April 21, the Ecuadorian Banana Cluster celebrated the Banana Day with a high-level international event on the sector’s industry and its future. It was attended by important […]
Thu 22/04/2021 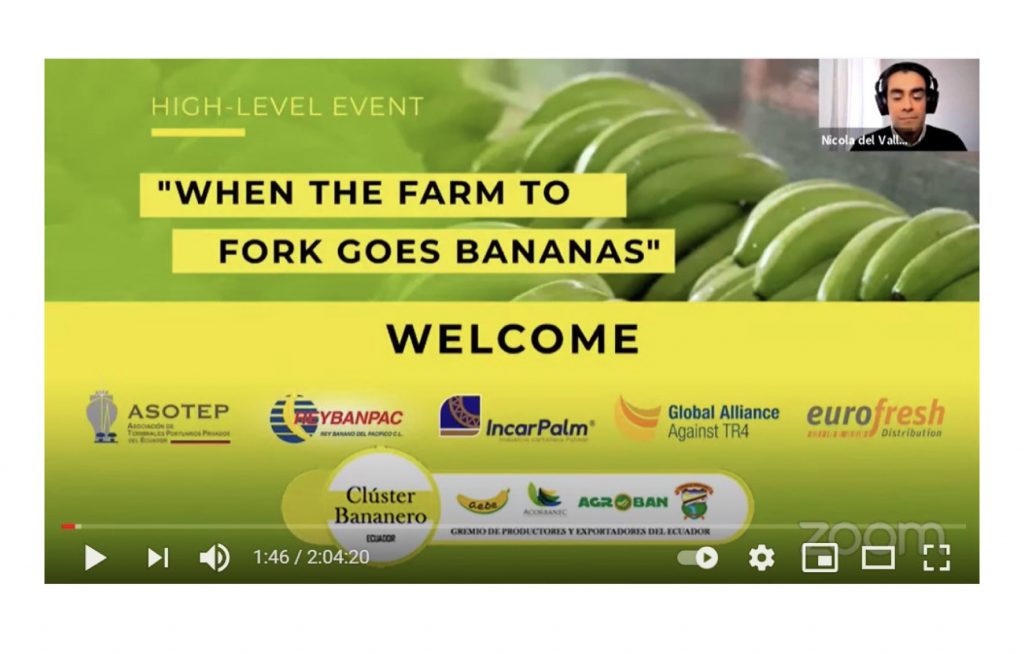 On April 21, the Ecuadorian Banana Cluster celebrated the Banana Day with a high-level international event on the sector’s industry and its future. It was attended by important speakers such as MEPs Juan Ignacio Zoido and Mazaly Aguilar, the Ambassador of the European Union in Ecuador Charles-Michel Geurts, representatives of the European Commission such as Koen van Dyck from DG SANTE, Maija Laurila from DG JUST and Luis Carazo from DG AGRI, Professor, PhD and researcher at Wageningen University Gert Kema, PhD and Professor Emeritus at the KU Leuven Rony Swennen, currently researcher at IITA, and Carolina Dawson from CIRAD.

More than 550 people registered for the event, and attended by an average of 300 people during the two hours within 3 different panels:

Participants showed their positions on the issues of sustainability, shared responsibility, certifications, FOC TR4 and the future of bananas in general. Speakers highlighted the role of shared responsibility in achieving sustainable development objectives, the coherence between EU requirements for local and imported production, the need for safe and simple certifications focused on consumers, and the need to promote dialogue and innovation.

At the end of the event, the Cluster shared an open letter to present to the authorities where the main conclusions drawn from the meeting were defended and asked the participants for their signature, support and diffusion. This letter also asks the United Nations (FAO) for the official declaration of April 21 as International Banana Day and its inclusion in the calendar, given the great importance of this fruit.

Category: Uncategorized
Tags: Banana Day, Europe, events
We use cookies on our website to give you the most relevant experience by remembering your preferences and repeat visits. By clicking “Accept All”, you consent to the use of ALL the cookies. However, you may visit "Cookie Settings" to provide a controlled consent.
Cookie SettingsAccept All
Manage consent