On Thursday 9 November Agrico opened its annual varieties and seedling show at its breeding and research centre Agrico Research in Bant. The varieties show attracted many interested national and […]
Tue 14/11/2017 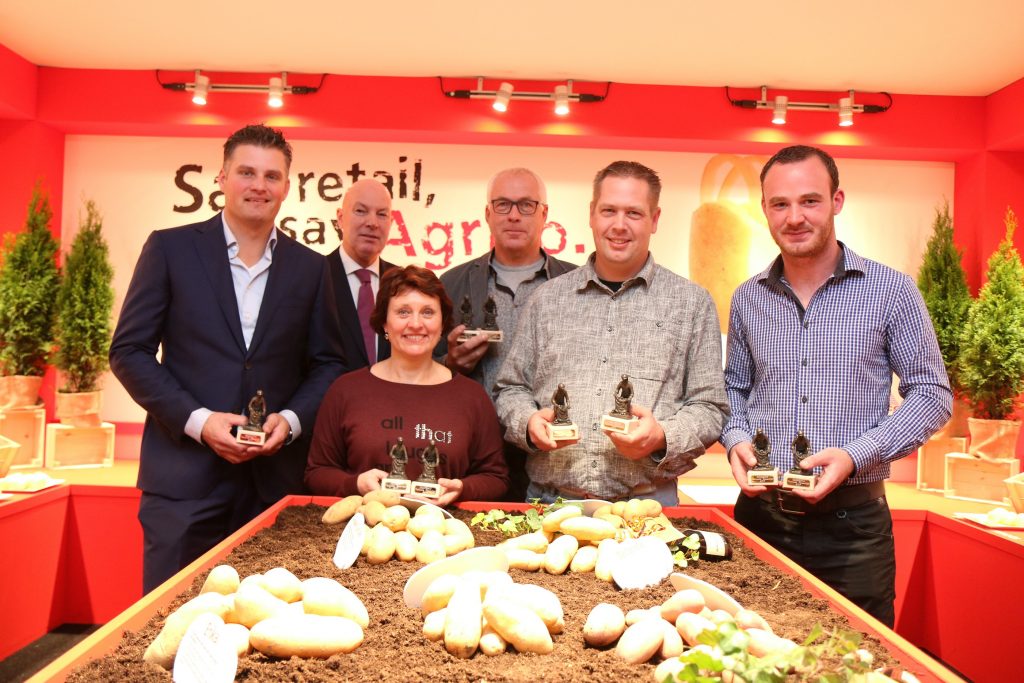 On Thursday 9 November Agrico opened its annual varieties and seedling show at its breeding and research centre Agrico Research in Bant. The varieties show attracted many interested national and foreign visitors, and also opened its doors to anyone interested on Friday 10 November. During the opening day, Agrico’s managing director Jan van Hoogen presented ten new varieties that have recently been included in the Dutch list of varieties.

The theme for this year’s Agrico variety show was Portugal. The average potato consumption per capita in Portugal is 91 kilos. Potatoes are an important feature of Portuguese cuisine. The total potato-growing surface area in Portugal is approximately 25,000 hectares with a total production of 490,000 tonnes. Potato growing is concentrated in the north of Portugal, where the average farm is small, usually covering just a few hectares. The larger farms are mainly found in the south of the country and in the Lisbon region (Montijo and Alcochete). A wide range of Agrico varieties are grown in Portugal. The main varieties are: Alouette, Picasso, Manitou, Rudolph and Evolution for the local market, and Esmee, Constance, Agata and Gourmandine for export to the Netherlands, France, Belgium and Germany.

At this variety show, we highlighted two special varieties: Alouette and Constance.

Alouette thanks its appearance in the spotlight to its Phytophthora resistance partnered with high yields under a wide range of climatic conditions. Alouette is a variety with an attractive red skin, yellow flesh and a long oval shape. Alouette’s most exceptional characteristic is its Phytophthora resistance, making it an ideal variety for organic growing, as well as creating significant added value for growers using conventional methods.

Constance is a medium-early, white skinned table potato. This variety has a potentially huge market consisting of various countries throughout Europe. This round oval potato has cream-coloured flesh and a lovely skin quality, and above all Constance also has excellent cooking qualities. Constance is perfect for the retail market, as the larger tubers make it a great baking potato.

New to the variety list
This year saw the appearance of a whopping 10 new Agrico varieties on the Dutch Variety List:

1) Adato; a table potato for the European retail market.

3) Twinner; an early-maturing table potato with sufficient dry matter for a variety of preparation methods in the kitchen. Its outstanding Phytopthora resistance makes it a popular variety with commercial organic growers and hobby growers alike.

4) Babylon; a direct mutant of the well-known Agria variety. Babylon has most of its properties in common with Agria, but has a 5-10% higher yield on average than Agria and is, unlike Agria, resistant to wart disease.

5) Chateau and 6) Loreley; these varieties are sisters and are both Salad potatoes. They are very firm cookers with a fine structure.

7) Bellanita; a variety for the highly niche ‘baby’ segment. Bellanita is a baby potato that is eaten with the skin on.

8) Danique; an early table variety with a high number of medium-sized tubers, making it ideal for smaller-size packaging in Western European and Scandinavian supermarkets.

9) Classico; a table potato for the more traditional markets in the Mediterranean region.

10) Corsica; a variety that is suitable for processing into crisps. Agrico considers this variety a better choice than the Hermes variety.

Agrico organised two knowledge sessions for its customers during the variety show. During these growth sessions, Agrico Research and Product Management employees shared their knowledge of cultivation, Phytophthora resistance, and cooking properties. This knowledge will help customers to grow in terms of yield and quality. In addition, customers can share this knowledge with their own customers. This is how Agrico likes to contribute to the professionalization and growth of the cooperative chain.

During the variety show, customers also had the opportunity to take a closer look at Agrico Research’s new, almost finished greenhouse complex. The greenhouse complex will be officially opened on Friday 6 April, and will hold an open house on April 7 for anyone who is interested. In doing so, Agrico joins the national ‘Kom in de Kas’ event (Come visit the Greenhouse).

A short film giving an impression of the variety show will soon be available for viewing on www.agrico.nl.

Category: Uncategorized
Tag: Agrico; New varieties; 2017
We use cookies on our website to give you the most relevant experience by remembering your preferences and repeat visits. By clicking “Accept All”, you consent to the use of ALL the cookies. However, you may visit "Cookie Settings" to provide a controlled consent.
Cookie SettingsAccept All
Manage consent